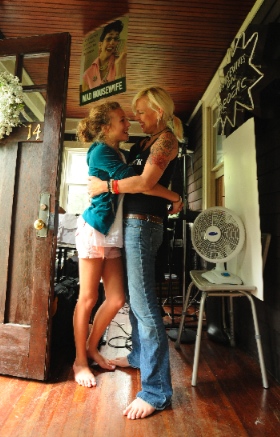 Joy Rose is a modern Media Mom – Currently teaching Mother Studies classes at the Museum Of Motherhood online. Founder & President of Mamapalooza, Joy is a rock and roll mama advocating for women, mothers and families with radio, tv and events– advocating for education through a vast network of blogs, mom events and media platforms. Joy is a nationally recognized, award winning producer, writer and activist. A feminist mom with four children, she is a NOW awards recipient, who works with the the M.O.M. Conference annually in NYC. She is also the publisher of Mamazina, formally known as Mom Writers Literary Magazine and founder of  The Mom Egg. Housewives On Prozac band and the Mom Rock movement she is an activist for women in the arts and beyond.

Joy Rose is President and Founder of Mamapalooza Inc. a company by women, promoting (m)others for social, cultural and economic benefit and the Founding Director of the first ever Museum Of Motherhood in New York City (2011). Joy was appointed the Susan B. Anthony Award from NOW-NYC in recognition of her grassroots activism and dedication to advancing equality and improving the lives of women and girls in 2009.

Committed a lasting legacy of empowerment and support, while redefining what it means to be a modern mother, Joy has successfully pioneered a new culture of mom-branded art and performance. She spent ten years as the leader of the rock band, ‘Housewives On Prozac‘, inspired by her experiences as a feminist mother in the arts (1997-2007). She continues to work tirelessly with women, and volunteers around the country, as an activist and educator co-creating events and programming, changing the way women’s voices are heard in the media, education and performing arts and impacting the culture of mothers and families.

Day to day operations of Mamapalooza include the inception and production of a series of large-scale festival events across the country, working in alliance with local government, parks departments and cultural affairs. Each Mamapalooza Festival generates community awareness while benefiting women and families, utilizing mom-music performers, women-owned businesses, vendors, health education, arts education, social services for families, and kids activities. Local media partnerships get the word out about activities that inspire, educate and enlighten. The first Mamapalooza event took place on a single stage in Manhattan in 2002. Yearly festivals reach over 100,000 families attending events with media in the millions (2010). Joy was responsible for coining the phrase ‘Moms Rock‘, now widely available through merchandising, buttons and tee shirts (1997)

In Sept. 2011 the Motherhood Foundation Inc. 501c3 non-profit, founded by Joy, initiated the first pop-up installation of the Museum Of Motherhood in New York City. The Museum Of Motherhood is the first and only facility of its kind; a world-class, international museum, family center and teaching facility of both social and educational significance. Documenting the journey of the mother’s evolving role as it pertains to circumstances, environment, responsibilities, health, significance, influence, position, and creativity, the museum studies, collects and disseminates information and education about mothers, motherhood and the evolution of family.

Her writing has been published online at multiple blogs including the Women’s Media Center and The International Museum Of Women and books like The Mom Egg and Hot Moms Handbook. She is a contributing author to theENCYCLOPEDIA OF MOTHERHOOD: A 3-volume Reference Published by Sage Publications, and The 21st Century Motherhood Movement, edited by Andrea O’Reilly. Her play, ‘Built For Extremes’, selected for the 2oth anniversary Writers/Directors Hand To Mouth Players Production, won a roving adjudicator award from TANYS (2011).  Her music has appeared on the dance charts and on radio stations around the country. Joy’s been profiled on CNN, American Voices, Women In History, NPR, Good Morning America, USA Today, The London Times, The Chicago Tribune, ABC, CBS, NBC, Ladies’ Home Journal, Child Magazine, and People Magazine (See Press). She completed the film The Motherhood Movement – You Say You Want A Revolution in 2009 and was the featured in Kate Perotti’s award-winning film Momz Hot Rocks (2009)

She is a featured guest speaker for Women’s Events, on Radio, in Hospitals (Highlighting stories of courage and survival), most recently at the ‘Wings Of Change’ event, Emceeing and speaking on ‘The Value Of A Woman’ (2012). She has appeared at MIRCI (Maternal Institute For Research and Community Involvement) conferences, has been a featured speaker on college campuses: Columbia Teachers College (2012), Marymount Manhattan College (2011) and Minnesota State University (2010) and The Women’s Media Center, NYC, speaking on Art, Feminism and Finances. Work is ongoing at MSU to launch the the first ever Masters level degree in Mother Studies with Lynn Kuechle and Jocelyn Fenton Stitt. She was a featured guest speaker at the ‘What Women Want’ Conference, Montana (2007), multiple Mother Studies Conferences, NYC, and sits on a special committee for the Westchester Office For Women and The Women’s Hall Of Fame (2006-2012). Joy holds the key to Seneca Falls, NY for her work on behalf of Women & Mothers (2005). Joy is a LUPUS survivor and kidney transplant recipient (2000).

ENCYCLOPEDIA OF MOTHERHOOD: A New 3-volume Reference to Be Published  by Sage Publications, edited by Andrea O’Reilly due out 2010. This comprehensive work will be marketed and sold to college, public, and academic libraries and includes some 750 articles, covering all aspects of a social science perspective on motherhood, including psychology, gender studies, sociology, education, human development, history, and other fields.

4 responses to “About Joy”